Home » Histories of the Present

The picture above is of a Rolleiflex camera donated by Ursula Winnington to a Peace Park that will be built in South Korea in 2024 for the families affected by a devastating massacre. The camera belonged to her late husband Alan Winnington who along with Wilfred Burchett was one of only two journalists reporting on the North Korean side from 1950 to 1953. Winnington witnessed the massacre site when the Korean People’s Army captured Daejeon at the end of July.

The camera is actually a replacement for the Rolleiflex he had at the beginning of the war (the newer one a model produced from 1952 onwards) which like the Olivetti typewriter his first wife lent to Wilfred Burchett did not survive the wartime conditions. The typewriter, as Winnington wrote in a letter to his first wife Esther, was eventually returned by Burchett “strafed with 50 cal armour piercing slugs” (Letter to Esther, Winnington Papers, 22nd May, 1952). No one seems to remember what happened to the original Rolleiflex but the chances are it suffered a similar fate.

Nevertheless the donation is significant. In Winnington’s pamphlet I Saw the Truth in Korea (1950) he published crucial photographic evidence maintaining that 7,000 people had been killed in ‘great pits’ located in a mountain valley on the outskirts of Daejeon. At present we know of eight such places, although there could easily be more. The pictures included in the pamphlet have been vital for the families still looking for their missing relatives. But because of the poor quality the exact location has been hard to identify.

What Winnington actually witnessed was one of many such massacres initiated by the South Korean government at the beginning of the Korean War. The administration at the time aimed to kill as many suspected “leftists” as possible so that they would not be able to join the North Korean advance. Initially Winnington’s report was dismissed as an “atrocity fabrication” by the US Military (see cable from General Headquarters Far East Command, August 12th 1950 in the National Archives). But since photos taken in 1999 by a Major Abbot of the Daejeon Massacre “in process” were released into the public sphere it has been impossible to deny (fig 2). In South Korea and beyond the body of the writing focusing on these tragedies continues to build. Winnington’s atrocity reporting is therefore starting to gain traction.

Winnington had no way to know this at the time. To him the pamphlet was first and foremost a corrective. He had been unhappy with the “subbing” of a report by the Daily Worker (“US Belsen in Korea” August 9th 1950) cabled to England previously. “The subbing of the atrocities story’, he wrote to the editor JR Campbell at the time, “was very bad and took out all of the eye witness verification of the facts” (Letter to JR Campbell, Winnington Papers, 15th October 1950). Winnington knew at this point that his photos were absent as he had yet to develop them. But what bothered him more was the absence of detail, or the refusal of the Daily Worker to provide specific facts from his interviews with local people and careful observation of the scene. “It could have been written without having been to the place” he remonstrated. He was, after all, the only correspondent on the ground.

But whatever Winnington’s personal feelings about his original report it is the photographs in his pamphlet that have provided the most enduring legacy. At the time Winnington was extremely critical as an earlier letter to Derek Kartun (Foreign Editor of the Daily Worker) shows:

“The photographs were all taken by me. I am not proud of this, looking at them, but at any rate while I was in the valley it was the dullest weather possible and I did not expect even as much results as this. Also, most of my photographing had to be done in the early morning and late evening what with dodging the planes of the Yankees, not to mention the occasional British plane one saw” (Letter to Derek Kartun, Winnington Papers, September 6th 1950)

Nevertheless a selection of Winnington’s photos were published in his pamphlet, and together with his descriptions of the scene they provided firm evidence of what went on. In the archive at Sheffield University there are many more examples, most of them unpublished by Winnington himself. 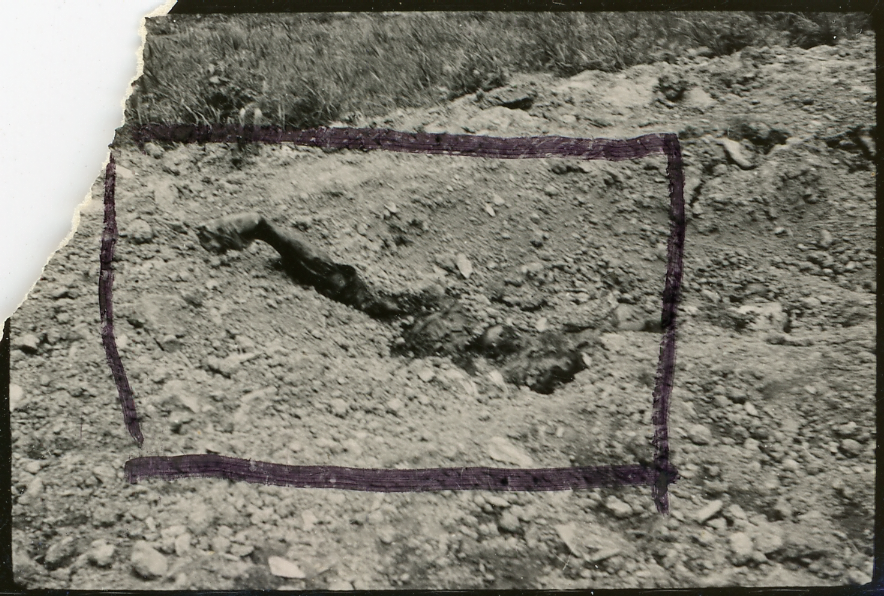 If Winnington was still alive he might be surprised to see how these details are increasingly important in South Korea. Each one of his photos is currently being examined by an excavation team who must recover the remains before the Peace Park is completed in 2024. Even the photos above – with the extended area included – provide concrete clues as to the width of the “pits” (fig 4). In many cases by referring to the mountains in the distance it is possible to find the exact place Winnington took the pictures. The image below may not seem significant, but it is clear it was taken above a backfilled trench with evidence of discarded shoes (fig 5). There are also other photos where pine leaves have been used to obscure corpses (fig 6) and shovels left in the “pit” (fig 7). All of this suggests a hasty retreat by those responsible. Facts like these help towards assembling a complex mosaic. For activists on site the pictures could be the final part of a story that has been slowly emerging for over twenty years.

Winnington must have spent some time at this place, since the average Rolleiflex camera only takes 12 exposures at one time. If Winnington was using 220mm film then this number increases to 24. Since there are 31 pictures specifically of the site (many more negatives were damaged due to vinegar syndrome) he must have changed the film in his camera at least a couple of times. The relatives of the victims are hoping that the pile of damaged photos below can be separated by a conservator in the future (fig 5). There could be much more information to find out. 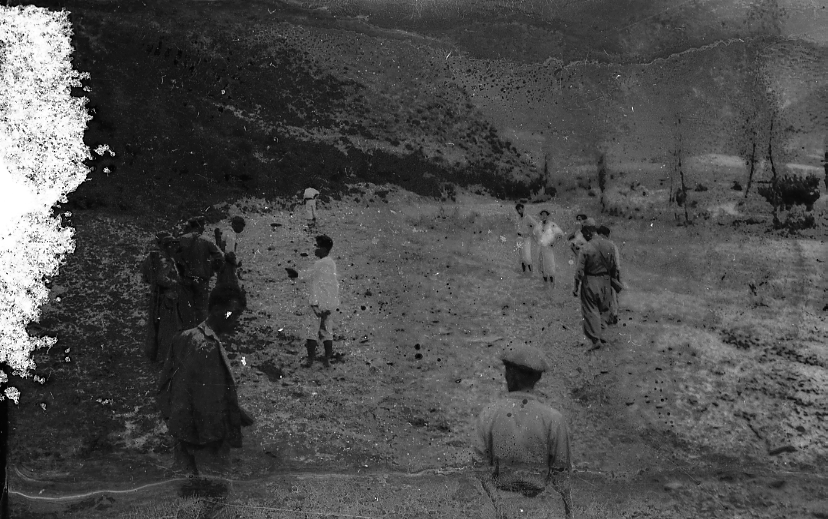 But Winnington’s photos are not as bad as he claimed. There is one panoramic shot of the valley that has provided the excavation team with much information (fig 10). Winnington wrote about a 200 yard “pit” which was confirmed by the Truth and Reconciliation Commission in 2009 when they spoke to local residents press ganged into digging it. One of those people can be seen in a Korean Language documentary discussing what happened in 2015 . But it has been impossible for the excavation team to find substantial remains as the original road was widened and diverted in the Eighties (fig 11). This made it a project beyond the reach of local government budgets and experience.

Because of Winnington’s photo this needn’t be the case. An area parallel with the road shows disturbed earth where the “pit” is located. It has been useful for the excavation team to find this image as it is the only one of this area in existence. Because of this photograph the local investigative journalist Shim Gyu Sang has been able to create the collage below merging past and present to make future excavations possible (fig 12). Again, the mountains provide a point of reference that has been invaluable.

The following photo had to be meticulously peeled off the top of the damaged pile shown earlier on (figs 8, 13). It is out of focus. But Winnington seems to be trying to give evidence of yet another “pit”. Perhaps he felt exposed to the Mustangs in the middle of the valley. The journalist has certainly taken this picture quickly as if desperate to retreat to the relative safety afforded by the mountains.

But even this little bit of information has consequences in the present. When juxtaposed with the panorama of the valley seen before the rough place in which Winnington was standing can be identified (fig 14). We are certain that the disturbed earth provides us with a ninth place people are buried. Winnington’s pictures could possibly reveal many more such examples. When we add to this the information provided by Abbot’s images more clues become apparent (fig 15). This is why the pile of damaged photographs in the collection is so important (fig 8).

This has made things even more complicated for the excavation team which has until mid-2022 to investigate the valley before the building of the Peace Park. Unlike Winnington’s written reports, this is indisputable evidence as to the reality of what happened here 70 years ago. The plan when the Peace Park is completed is to juxtapose the buildings with the eight excavation sites already shown (fig 3). Winnington’s camera in this sense is an extremely “radical object”, both for meaningful display and also of practical use. These photos will return to Daejeon for a Special Exhibition taking place this year. After this the camera may even be used on site where people have been experimenting with a variety of lenses and perspectives for years. There is an “unfinished” quality to Alan’s reporting represented by this camera then. More than an exhibit in the eventual Peace Park it has become part of a living history: an object giving hope to the orphans of the massacre but also something deeply implicated in the construction of the site.

David Miller lives in South Korea where he specializes in the journalism of Alan Winnington. He has been the researcher, and participant, in three films on the Daejeon Massacre and has curated the first ever exhibition of Winnington’s images in South Korea. In 2021 his research will feature in a KBS documentary to be shown on the anniversary of the Korean War. He currently works as the International Advisor for the local authority in Daejeon where he conducts research on site as well as amassing biographical information on Winnington with the help of his family members. He can be contacted at davidmiller@korea.kr.