As we approach the 75th anniversary of the key event in repulsing fascism in the East End of London, David Rosenberg looks back on the importance of the Battle of Cable Street, and looks forward to the events planned for October:

On 4th October 2011, we will mark the 75th anniversary of the Battle of Cable Street – an iconic moment in the struggle against Sir Oswald Mosley’s British Union of Fascists.

On that day, a movement basking in the contemporary triumphs of its counterparts in Italy, Germany and Spain, convinced of its
righteousness and invincibility, claiming to voice the frustrations of the abandoned and disenfranchised and to be harnessing their energy to a renewed national purpose, came seriously unstuck.

Mosley had planned to celebrate the fourth birthday of his fascist party by sending 3,000 uniformed blackshirts in four marching columns through London’s East End streets where a beleaguered community of 60,000 Jews eked  out a living.

The fascist troops were heading for four platforms – in Shoreditch, Bethnal Green, Bow and Limehouse, where Mosley and other leading fascist ideologues would delight their local supporters with speeches promising a “Greater Britain” at the expense of their Jewish neighbours whom they blamed for all society’s ills.

Their grand scheme of 4th October failed. It met determined resistance not just from that community they had long been assaulting with words and, for many weeks, physically terrorising. The wider East End population, including many from the equally impoverished Irish community that Mosley tried to turn against the Jews, came out to stop the fascists too. A human wall blocked every entrance to the East End, especially at Gardiner’s Corner, Aldgate, and a series of barricades were built in Cable Street.

Seven thousand police, including the whole of London’s mounted police regiment, could not clear a pathway through for the fascists. Mosley’s movement suffered a great blow at Cable Street but soldiered on until 1940. The self-confidence of the anti-fascists grew immeasurably on that day but they could only muster such numbers because of the persistent work they had been conducting in several arenas to neutralise the fascist threat and even win over some who once embraced Mosley’s movement. 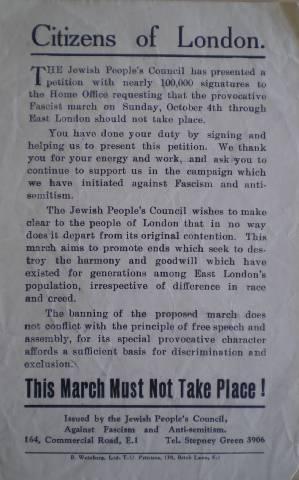 In some London streets, commemorative plaques mark significant lives and event but their story must be told in just a few words. Just off Cable Street, at the junction with Dock Street, a red plaque commemorates the outstanding achievement of anti-fascists on that October day.

Further along Cable Street, though, on the side-wall of the former St George’s Town Hall, stands a more graphic monument, a huge mural, the size of the building itself. It was designed by a local artist, Dave Binnington – inspired by Diego Rivera’s style – but completed by others. Binnington abandoned the project after it was repeatedly defaced by the political descendents of Mosley’s movement. A thin but effective layer of varnish protects it today from those who want to deny the narrative it portrays through its powerful images.

As historians our job is to make history real; not through art but through using powers of description and analysis to enable our public to feel as if they really are standing in the shoes of individuals of the past. In trying to achieve this with my area of historical interest – London’s East End – I have been using physical props such as street names, buildings and panoramic views.

In the footsteps of yesterday’s fighters

I attempt to convey events in this history by taking groups on interactive walks on the actual streets where the events were played out. One of my walks is called “Anti-Fascist Footprints: a walk through the 1930s East End from Gardiner’s Corner to Cable Street”.

In designing this walk, I chose to start near the redeveloped site that was once Gardiner’s Corner, and knew that the climactic moment of the walk would be the Cable Street mural. The challenge was to fashion an elaborate route from one
to the other enabling me to reveal the story between the headlines.

The body of the walk would be a series of stopping points at which I would offer answers, sometimes definite, sometimes tentative, to a series of questions: What was Mosley doing before he was a fascist? Why did his movement concentrate so heavily on the East End? Why were the police so determined to let him march? How did the anti-fascists start to organise? Which individuals or organisations were involved? How did the fight against fascism in the East End relate to the fight against fascism in Spain? And didn’t the leaders of the Jewish community tell people to stay indoors? So, why did local Jews ignore their advice?

Many such questions arise spontaneously from walkers.

I can point to physical features of the environment: the street where  a key activist was born, a housing estate where unity between Irish and Jewish communities was forged, the building that once housed the office of the Jewish People’s Council, a campaigning organisation churning out propaganda leaflets.

But I also have a portable historical resource – a scrapbook with photos, leaflets, quotes from participants, maps, and contemporary newspaper cuttings.

The scrapbook is growing –  a by-product of visits to various archives: the People’s History Museum and Working Class Movement Library in Manchester, special collections in the libraries of Warwick and Sheffield Universities, and more locally at the Bishopsgate Institute on the edge of the city and the East End, while I have been researching a long-form version of aspects of this history to be published shortly before the commemoration in October.

The youngest participant on the walks to date has been a 9 year old, the oldest over 80. I’ve taken school and college groups, trade unionists, community organisations, children and grandchildren of Cable Street veterans, and members of the general public of varying ages and ethnicities, all fascinated by the rich mix of ingredients that contributed to this historical event.

As we return to our starting point, we cut through a small green space named Altab Ali Park. Ali was a young Bengali clothing worker stabbed to death in a racist attack more than 40 years after Mosley attempted to invade the East End. A poignant reminder that we have not yet been able to confine this history to an archive box.

For details of this walk, and David Rosenberg’s other East End walks, visit:
www.eastendwalks.com

Battle for the East End: Jewish responses to fascism in the 1930s, by David
Rosenberg will be published by Five Leaves Publications.

Commemorative events (talks, book launches, films) will be taking place at
Wilton’s Music Hall (off Cable Street) on the weekend of 1st and 2nd October
2011, organised by the Cable Street Group and over the following two weeks
through events organised by the Jewish Museum.