Home » Histories of the Present

How can the power and invention of Forum Theatre inform radical histories of oppressed groups, such as the homeless?

To mark World Homelessness Day on October 10th, Peter Jones spoke with Adrian Jackson MBE, Founder and Joint CEO of Cardboard Citizens–a theatre company which works with homeless people. In 2021, Adrian stepped down as Artistic Director of Cardboard Citizens after three decades of important work creating outstanding theatrical productions, which put the stories of people with lived experience of homelessness firmly in the spotlight. This interview reflects on this journey, ranging widely across topics, including the power of Augusto Boal’s ‘Theatre of the Oppressed’ methodology to activate social change, the politics of ending homelessness during the COVID-19 pandemic, and forum theatre as a tool of the Left–an anti-dogmatic means of accommodating the voices of those subjected to the rolling historical crisis of homelessness.

Listen now on Soundcloud – Apple Podcasts – Spotify – Stitcher – or wherever you get your podcasts. 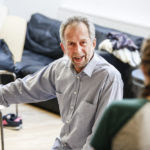 Adrian Jackson is the Artistic Director, Founder and Joint CEO of Cardboard Citizens, a theatre company working particularly with homeless people, which he founded in 1991 whilst working for London Bubble; his last production for the latter was a punk rock musical by Catherine Johnson (of ABBA fame) Too Much Too Young. He has directed over 30 productions for Cardboard Citizens, including Pericles and Timon of Athens, co-produced with the Royal Shakespeare Company, The Beggar’s Opera (with ENO), The Lower Depths (with London Bubble) and the Evening Standard award-winning Mincemeat. His 2012 play A Few Man Fridays about the expulsion of the Chagos islanders played to critical acclaim at Riverside Studios. Kae Tempest’s Glasshouse (2014), Sarah Woods’ Benefit (2015) and Ali Taylor’s Cathy all toured nationally. In 2017 he co-directed a season of new plays around the history of housing, Home Truths, with commissions from Stef Smith, EV Crowe, Heathcote Williams, David Watson, Nessah Muthy, Chris O’Connell, Sonali Battacharya, Lin Coghlan and Anders Lustgarten. In 2019 he wrote and directed Bystanders, which performed to sellout houses at the Edinburgh Fringe. He is currently working on The Ruff Tuff Cream Puff Estate Agency, a new musical for Coventry City of Culture 2021.

He stepped down as Cardboard Citizens Artistic Director in 2021, but remains an Associate Artist of the company.

As Augusto Boal’s translator on five books, he is a leading expert on Theatre of the Oppressed and has taught this work throughout the world. He was awarded an MBE in the 2018 New Years Honours. His first film, Here For Life, co-directed with Andrea Zimmerman and produced by Artangel, premiered in 2019.